Posted by jsslifelike on August 2, 2009 in Commentary, News 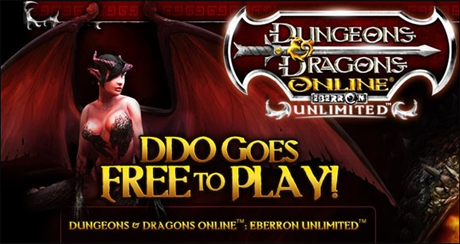 Dungeons & Dragons Online is planned to go free-to-play in the near future. Developer Turbine and publisher Atari initially brought the game to market as Dungeons & Dragons Online: Stormreach in February of 2006. It has maintained a subscription-based model($14.99/month) but will offer players a choice in the near future. Turbine will present both models in order to bring old players back and new ones in. Can this option reboot the game into a flourishing MMO?

Once the software becomes free-to-play one month from now, it will be renamed Dungeons & Dragons Online: Eberron Unlimited. New additions to the title will be as follows: one new class, a boatload of new content, and a level cap which will be raised to 20. Those of you that played Neverwinter Nights will be extremely familiar wil the classes, races, and alignments. Gamesman “Zeiram Wing” is currently participating in the beta and, even with his tongue tied, he managed to say that he is “enjoying the game a lot” and that it is “something we should watch” to be our possible online RPG that every Gamesman can play together. Here is what you would need:

Installing the game will either require 3 GB of hard disk space or 5 GB if you plan to run the software in higher resolutions. Be advised that DDO:EU does not run on MacOS or Linux-based systems. It would seem that the game will run on just about every PC similar to World of Warcraft. Hopefully it can break some of WoW’s player base away as well by bringing a new model to the table.

← PlayStation3 Manufacturing Costs Down By 70%
I’m Editing the Show… I swear! →