Posted by jsslifelike on August 25, 2009 in Previews

The Saboteur looks interesting to say the least. It appears to be an action/stealth/platform hybrid of a game with driving elemants sprinkled in for good measure. EA and Pandemic released new screens of the game today at GamesCOM and it is looking nice. Also, in case you are unfamiliar, there are a few notes from the game’s fact sheet as well. Enjoy.

“Play as Sean Devlin, a street-tough Irish racing mechanic seeking personal redemption in the first open-world action game set in Nazi-occupied Europe. Now, it’s time for payback—with the help of the French Resistance, British intelligence, an arsenal of weaponry, and your own street smarts and brawn, you must exact revenge on those who aimed to destroy your life. Motivated by retribution and armed with tactics of sabotage, blow up zeppelins, derail trains, implode bridges, destroy armored tanks, and level enemy facilities in the name of vengeance.”

• Live the resistance in an open-world Paris – Fight and sabotage your way through a stylized open-world 1940s Paris – from the top of the Eiffel Tower, to the riverbanks of the Seine, the cathedral of Notre Dame or the prestigious Champs-Élysées.

• Be the Saboteur –Use a broad range of weapons and explosives to perform your blockbuster sabotage as you single-handedly hunt-down your enemies to dismantle and destroy the Nazi occupation.

• Quiet In, Loud Out – Use gameplay systems like Climbing, Sneaking, and Stealth Kills to infiltrate the Nazi occupation to perform acts of Sabotage Once you’ve blown your target to pieces, leverage the intuitive cover system and assortment of weapons to blast your way to freedom. 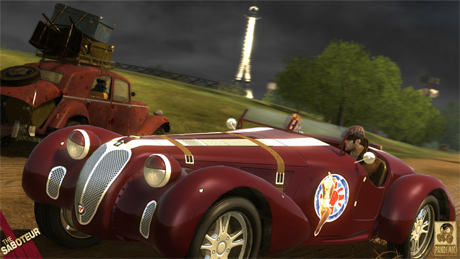 • Vertical World – This version of Paris was designed to leverage the unique abilities of The Saboteur. Being a Saboteur is all about surprise attacks and Paris’ rooftops are the perfect path for your secret operations.

• Will to Fight – The Saboteur introduces a innovative new feature that is both an iconic visual style, and a compelling gameplay element. See and feel Paris change around you as you progress through the game. Go from a dark and oppressed black and white policed state, to a bright and inspired world where the citizens fight back..

• Hijack any vehicle – From high performance racecars to military vehicles, as the Saboteur, you can drive any vehicle that comes along to escape your pursuers.