Posted by jsslifelike on October 22, 2009 in Reviews

Are you looking for something new to scratch that old-school gaming itch? Enter Millennium: A New Hope– the newest RPG from developer Aldorlea Games. Located in France, Aldorlea is a developer that boasts specialization in blurring the line between role playing and adventure, all while presenting gameplay in 16-bit fashion. They are responsible for fostering such digitally distributed titles as 3 Stars of Destiny and Eternal Eden, both of which were well received. Millennium follows this tradition.

The tale commences as a mother imparts a story to her young daughter- a story of the impact one adolescent girl had on the city of Myst. That strong-willed female is the game’s heroine, Marine. Hailing from the impoverished ‘Green Grass Village’, Marine soon becomes thrust into the responsibilties of her father, Stanislaus. This man is the only villager who is courageous enough in attempting to convince the wealthy and brash municipality of Mystrock of the Green Grass plight. Belittled, injured, and refused, Stanislaus is recovered by a peasant and returned to his home, of which he is bedridden. Marine is as a result tasked with the duty of delivering a parcel to her grandfather, far north of her home. For the most part, the dialogue is engaging, save for a few quirky speckles. It is your typical Japanese RPG-fare, a goal Aldorlea was apparently projecting toward.

Noticeably formulated in Enterbrain’s RPG Maker XP, Millennium instantly sets itself apart with high-resolution, anime-style art from the splash screen onward. The 16-bit graphics evoke a nostalgia for a past generation while subtly and convincingly suggesting that game could appear on a console download service. On the other hand, every part of the experience seems to fit excluding the dialogue boxes themselves. The background image seems stretched too far and distorted, while the text displays in a simple vanilla Arial font. While this is an issue, the presentation is, in reality, only a vehicle to drive the narrative. 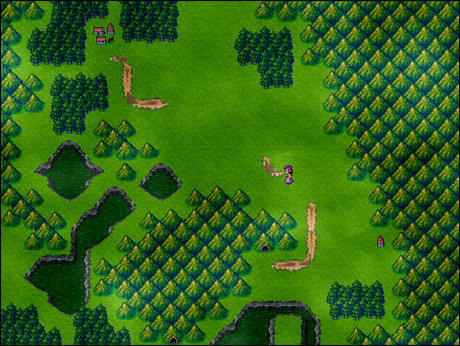 An experience akin to that of Phantasy Star II, Millennium features psuedo-three-quarter-view world navigation with a twist- at certain times and places, the cursor rolls over into an icon resembling a pair of shoes. At these points, you may prompt your toon to ‘jump’ to what appears to be isolated regions of the map. Aside from the occasional click, movement simply consists of the four arrow keys of the keyboard. All menu and inventory management is accomplished with the right mouse button. Once in the menu, left-click becomes the ‘enter’ value and right becomes ‘cancel’. This makes equipping and item use extremely intuitive. The other major area in which the mouse will be used is to open doors and speak to NPC’s. There is only one one niggle- many villagers or townspeople are bustling along their path too hurriedly to make approaching them easy. That fact makes some conversations seem like rarities rather than something always attainable- a ‘random encounter’ if you will, and that brings us to the next component.

The battle system is standard early 1990’s- high on visuals and low on animation. Every mechanic here is what one would expect from a turn-based, menu-driven encounter. Upon the birth of each run-in, the player is presented with three options. ‘Fight’ allows deeper customization of the player’s turn such as attacking, defending, and item use. ‘Rush’ plainly executes a physical attack on an enemy of the AI’s choosing, and ‘Escape’ is, well, self-explanatory. Enemies are competently rendered, but the party member art and battle tunes are the pieces that will carry you through each battle, wanting yet another afterward.

The soundtrack is territory where Millennium excels superbly. Every track is engaging and eclectic, accommodating the environment and mood in parallel. The game exhibits some 20 unique melodies, each of which will become en grained in your mind with any decent length of playtime. The sound effects, however, are nothing exquisite, but they have no need to be. Each is eerily reminiscent of legacy gaming.

The game brags four separate difficulty modes: Very Easy, Easy, Normal, and Hard. Present in addition are secret bosses called ‘Animal Kings’ and are similar to the ‘Weapons’ in Final Fantasy VII. More of these clandestine encounters are available with the choice of higher difficulty levels. Millennium also features 40 unique quests and a questbook to keep track of them. Players can expect their playtime(in hours) to enter double digits, especially for completionists.

In conclusion, Millennium: A New Hope is software worthy of Genesis and Super Nintendo era gaming. There is a good amount of content here to be had and it could easily be featured as a WiiWare title in the vein of Final Fantasy IV: the After Years. A New Hope is the first installment in what is rumored to be a five-part, episodic story arc. Pricing always factors in to the overall opinion, and with the announcement of the title being featured at bigfishgames.com at $7 USD(half the original price), it is elevated that much more. Whether you are an old-school roleplayer that enjoys components from newer RPG’s, or you are the ever-present ‘budget gamer’, Millennium is definitely worth a look and clocks in at an 84 of 100.

[Millennium: A New Hope at bigfishgames.com]

← The Stolen Moon of Londor LIVE Interview
From the ROFL Files: Another 360 Disc Drive? →