Battlefield Heroes Introduces Vampires and Werewolves to the Battlefield

Posted by jsslifelike on February 11, 2010 in News 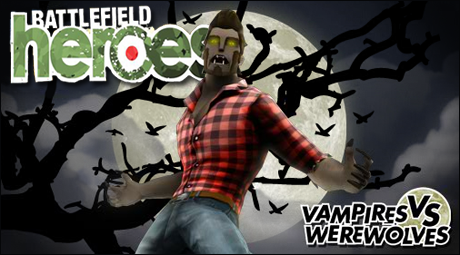 The world is obsessed with blood-sucking demons and vicious werewolves, and so are we! Battlefield Heroes™, the hit Play 4 Free third-person shooter has been invaded by vampires and werewolves. In a special month long event, the many millions of Heroes who have perished on the battlefield can be brought back to life. Anyone can fight alongside these preternatural beings but to become one players must purchase the all-new outfits as a special bundle on the website or as separate items in the in-game store. Once-dead Nationals can be transformed into blood-sucking vampires and Royals into teeth bearing werewolves. Three existing maps have been converted to an eerie night setting to set the stage for an epic battle between these immortal enemies.

With endless hours of signature Battlefield sandbox action and a built-in matchmaking system to ensure new and old players of equal skill levels are paired together for fair play, Battlefield Heroes is EA’s popular web-based free to download, free to play title.

Players can quickly download and easily launch the game from http://www.battlefieldheroes.com. Character customization and upgrade items are available for Valor Points (points earned by playing the game) or with Battlefunds (a fictional currency bought with a credit card, PayPal or other methods such as SMS) so players can change or upgrade their hero at any time.

← Get Your Email and Gamesmen Checks In For Ep. 27
Barry and Rebecca Join the Cast of THE MERCENARIES REUNION in RE5: GOLD EDITION →