Posted by jsslifelike on March 22, 2010 in Previews 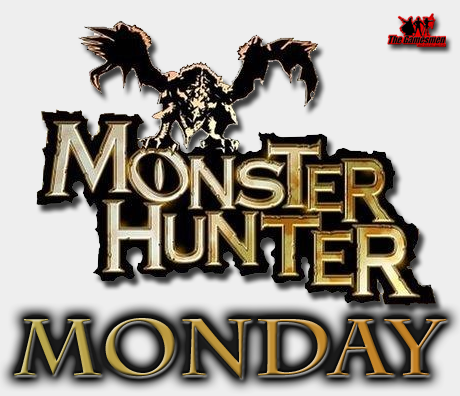 Each Monday, The Gamesmen will feature each weapon class from the upcoming online multiplayer Wii title, Monster Hunter Tri, through consecutive weeks all the way up to its April 20th release. The posts will include a short synopsis, Wii controls scanned from the demo “manual”, and a short video showcasing the weapons. You can read Week One’s post here and Week Two’s here. The feature today is what some consider the cheesiest and others the most deadly, the Hammer. 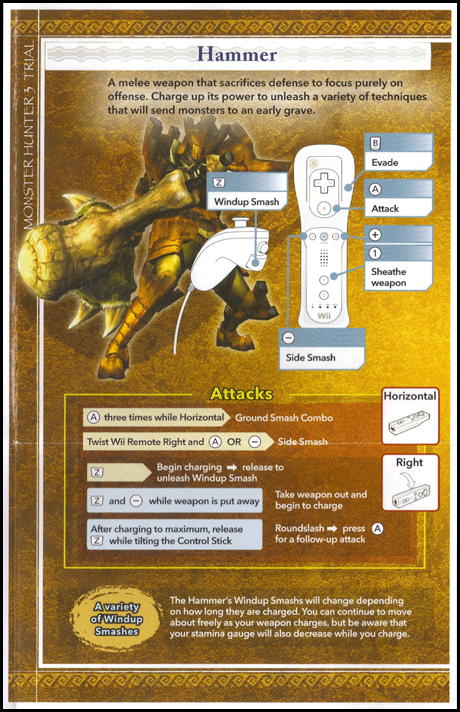 The Monster Hunter Wiki (http://monsterhunter.wikia.com/) states that the Hammer weapon class is a fairly common weapon type able to be used by players since the first Monster Hunter game. Staunch and resilient, the hammer is perhaps the first representative weapon-of-choice to dictate pure, unadulterated damage directly to the target. In this field, the typical weapon’s attributes allow a hunter to run openly with the weapon drawn, perform short-range, almost “bunting” and swing attacks with their initial attack buttons, and the ability to charge up different types of swings while moving.

As the hammer class has immense damage potential, and indeed, some of the outright highest raw damage in the game, the weapon boasts no defensive capabilities aside from the standard rolling dodge maneuver. A sense of timing is needed to master the weapon’s true damaging traits: releasing charged swings while timing and aiming diligently against the foe’s movements. No easy task. Further, hammers have a decent variance of elemental attributes, and are useful for racking up elemental damage. You cannot cut a tail with a hammer, but it is easy to break heads and other body parts.

Typically of moderate sharpness, the hammer is able to supplant high damage through its shoulder-button charged moves. These include a single swift swing, a one-two “golf swing,” and, depending on if the hunter is moving or not, a whirling attack or a heavy bash onto the ground.

Stun damage to a large monster can be visually noted when yellow streaks or “sparks” are seen to appear at its head. The Monster will fall down and have stars circling its head when it receives enough stun damage and is “Knocked Out”. This is the perfect time to launch a few combos at the area of your choice while the monster is vulnerable.