Posted by Hardlydan on March 23, 2011 in Feature, Reviews

Still on the fence about Dragon Age II? Don’t be. Here’s the premise: fleeing from the blighted kingdom of Ferelden, you lead your family through Darkspawn infested lands in an attempt to reach safety in the city-state of Kirkwall. A decent start to what -for some- is one of the most anticipated games of 2011. But, if the user reviews on Metacritic are to be believed, this is apparently the worst game in recent memory. Reports of buggy gameplay and corrupted saves are flooding the site. Some people are even complaining of poor visuals and lackluster, linear approach. It is difficult to discern if these critiques are a result of playing the game or perhaps some sinister plot to undermine EA and Bioware.

The characters are well rounded, each with distinct motives and reactions to your actions. However, pleasing everyone is fairly easy so keeping everyone on-side is only troublesome for those completely socially inept. The cutscenes are far improved on the previous game with the camera panning around the scene. The dialogue is far, far better than in the original, less woody and more cinematic with livelier exchanges. Although not as sharp as Mass effect 2(some of Hawke’s jokes are awful), every exchange feels like the player is affecting the plot.

Missions are the usual “go here, talk to/kill people, return for reward” faire with a few continuing from act to act. None of these feel like filler, though, and keep you interested in the plot while the main missions drive the story tremendously(not to mention giving you another hit of the wonderful action). Again more refined than in Origins, taking influence from Mass Effect 2 the controls are slick and more immediate. Battles are fast paced, well animated, noisy and gory although the screen can get a little crowded at times on the console versions. 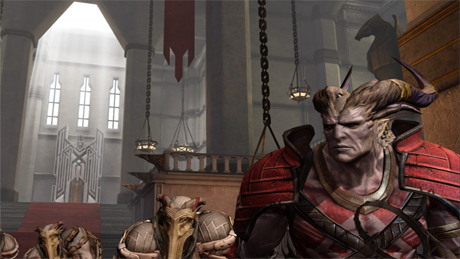 The most amazing thing about Bioware’s creation is the Tolkienesque lore they have created, providing a rich world full of politics, religion and history. You can almost imagine huge tomes sitting on a shelf in Bioware Towers full of history of the Dragon Age universe, constantly being written as plans for further games and media are envisaged.

Graphically, it is a step up from Origins and with a high resolution texture pack for the PC available, complaints about graphical fidelity seem to be moot. The repeatedly cut-and-paste dungeon maps are a bit of a let-down when compared to the likes of Dragon Age: Origins and Mass Effect 1 & 2, but are soon forgotten when the fantastic characters and story grab hold of you and whisk you down the 30+ hour road of action, magic, gore, blood, murder and loot.

As much as I hate having to give games something as arbitrary as a score, it has become expected that every review has to have some kind of system to let the readers know what the reviewer thought of the game without actually reading the article. I absolutely loved this game, flaws and all. While not as polished as it could have been (and yes at times it does feel rushed), it is still one of the most engrossing titles I have played for a while, so if you don’t mind I’m going to stop now and start another playthrough.

PC gamer, hermit and sometimes surfer living in North Devon, UK. Can normally be found on steam or in the pub.