Posted by Tephlon12 on May 9, 2015 in Editorials, Kicktsarter

Space sims seem to be coming back in a very real way. Over the past couple of years multiple games in the genre have sprang up. It should come as no surprise with the huge crowdfunding success stories for games like Elite: Dangerous and Star Citizen. Whilst browsing Kickstarter as I happen to do every so often, I stumbled onto Impeller Studios crowdfunding page for Starfighter Inc. This is a game coming from some of the people who made the X-wing games once upon a time. With space sims gaining popularity recently, it seems as good as time as any for them to want to make a space dogfighting game. 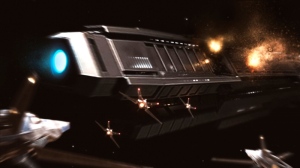 The Kickstarter page shows very minimal in-game footage, but the talent is there and the game they are making sounds like great idea and like it will be incredibly fun to play. The developers in the Kickstarter video described the game as World of Tanks meets Counterstrike but in space and in my opinion that sounds like an interesting idea. So I encourage anyone to go check it out and see for yourself exactly what the team is working on and what they hope to include in the future.